Last Wednesday Bravo’s hit culinary reality television series “Top Chef” concluded its 12th season, crowning Mei Lin with the coveted top prize. Coming in runner-up, for the second year in a row was a high-performing African-American chef. This year’s cheated chef was none other than Gregory Gourdet. The producers made sure to properly edit the finale and comments of the judges to ensure we didn’t have a full-out catastrophic repeat of last year’s egregious titling of “Top Chef” to Nicholas Elmi. If you are unfamiliar with the show and the catastrophe I just mentioned, let me fill you in. “Top Chef” fans, I’m sorry we must rehash season 11 to fully understand what’s going on here.

The Season 11 finale of “Top Chef” came down to two chefs, Nina Compton of Scarpetta Miami and Nicholas Elmi (unemployed). Nina consistently outperformed her peers only falling to the bottom or succumbing to mistakes maybe two or three times. She won numerous quickfire challenges raking in cash and a car and consistently wowed the judges with her interpretations of french technique combined with Italian and Caribbean flavors.

However, due to the immunity, the judges could not send him home. The judges outright said that his performance was so horrible, that were it not for the immunity he would have gone home. Guest judge Jacques Pepin questioned Nicholas directly in an attempt to get him to forfeit his immunity so that the judges wouldn’t have to eliminate someone who didn’t deserve to be eliminated. Nicholas didn’t budge and Stephanie ended up being the sacrificial lamb that evening. Nicolas survived and continued to serve under seasoned dishes, dancing his way to the finale.

In the finale, Nicholas yelled at his staff and threw plates in the view of the judges and other diners and…….. you guessed it — he served under-seasoned food. In the pre-win critique, Tom Colicchio dinged Nicholas for not seasoning his food. Every single plate lacked seasoning. Hearing this fans watching that evening knew that Nina had the win in the bag. Then the gauntlet was dropped and despite inconsistency and serious technical errors (something as basic as adding salt to the dish), Nicholas was crowned “Top Chef.” 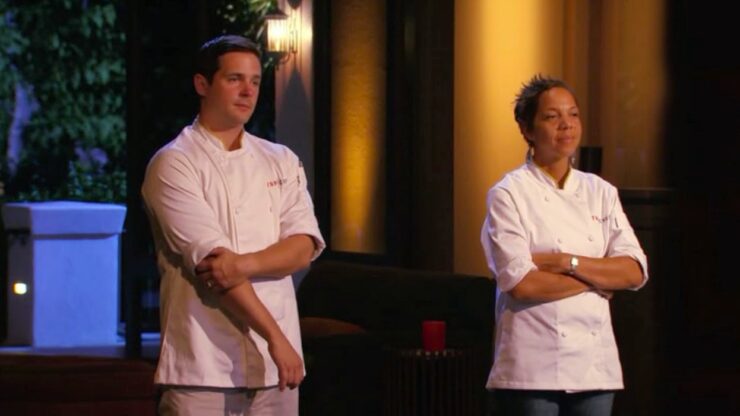 Even he was shocked. Nina gracefully accepted the defeat and congratulated Nicholas on his win. The win caused outrage and damaged the “Top Chef” brand. Head judge Tom Colicchio was a deciding factor in the win and overruled the other judges to award the win to Nicholas. This all left a bad taste in the mouths of fans. People labeled Colicchio all sorts of horrible names on social media. He was so taken aback by the backlash that he released the scores to the public in an attempt to calm the crowd. Ehhh, we know what this really is.

Fast forward to season 12 and it seems we are seeing a repeat. There is a part of me that wants to be happy that a woman was awarded the win. Mei is only the third woman to win the coveted prize out of 12 seasons.  However, they had an opportunity to award the win to a woman and an African-American and chose not to.

The producers ensured that they selected a winner who demonstrated skill and wasn’t as mediocre as Nicholas. I can’t argue that Mei wasn’t a great chef, she just wasn’t the greatest chef and she wasn’t a greater chef than Greg. Like Nina did in season 11, Greg consistently wowed the judges and won numerous quickfire challenges. In the finale in Mexico, Greg impressed the guest judges and finale diners.

Throughout the season Greg was known for his flawless execution of technique and consistently delivering bold flavors. In the finale, he stepped out on a ledge and decided to cook with ingredients he had never used before. He embraced local cuisine and local ingredients. Mei somewhat did the same, except she cooked a dish she had previously cooked during the season (a favorite of the judges both times) and stuck to cooking the type of cuisine she had become known for.

When it came down to the final tally, by my count Mei and Greg were tied. Through a four-course meal, Mei won 2 courses and Greg won 2 courses. The tiebreaker should have boiled down to risk and overall technique. Using that formula Greg would have walked away with the win. Nicholas won last year with much less 🙂

There seem to be some serious inconsistencies here. The fine print and touted rules of the show state that the winners are determined by the scoring of the judges and the show’s producers. They also state that past performances throughout the season is not weighed when determining the winner.

Interesting, that they would stress the exclusion of prior performance during the season but mention it while judging Mei’s repeat congee dish. They explicitly judged the congee of the finale to the congee they were served earlier in the season.

Seems like the whole thing is rigged and Bravo Network and “Top Chef” producers have a serious consistency and diversity issue on their hands. I find it offensive that out of twelve seasons only three women have been awarded the prize, and only one African-American and two Asian-Americans (two of the three women) have been winners. The rest have been white males.