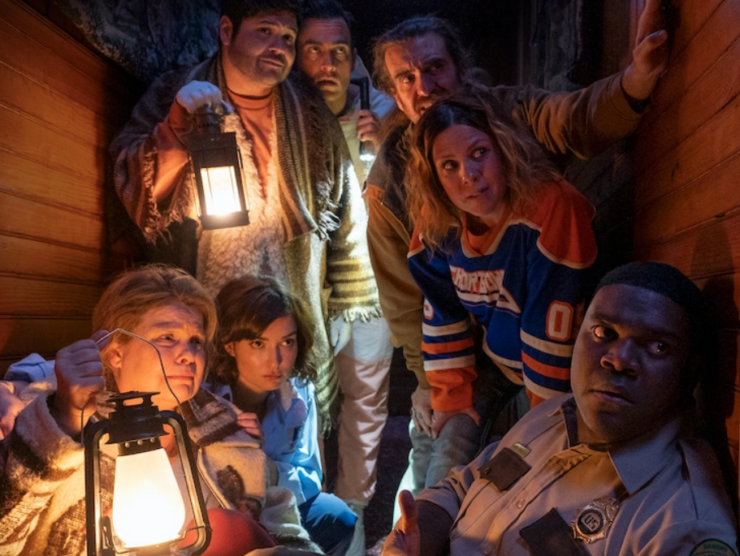 This film is a horror-comedy-whodunnit-murder mystery. It also has a few sly commentaries on male: female relations, feminism, and confidence. I would describe it as Agatha Christie meets Hot Fuzz.

There is some mayhem but generally speaking there is not THAT much onscreen bloody imagery.

Although the two leads always sparkle when they are onscreen, like many such whodunnits, this film shines because of an ensemble cast and good writing. Werewolves Within is loosely based on a video game, but it certainly didn’t feel or look like it.

Special effects are few and far between and with one or two jarring exceptions, don’t ever take the viewer out of the realm of suspended disbelief. This was a low-budget movie that didn’t look low-budget. Werewolves Within did not use that many jump cuts and other cheap horror movie tricks. There were plenty of zoom shots and visual gags though. The film quickly sets up the premise and lets the fun begin.

The story is set in the small hamlet of Beaverfield, Vermont but it really could take place anywhere that is small, rural, and out of the way. Finn Wheeler (Sam Richardson) is a somewhat portly and far too nice forest ranger who has just been assigned to Beaverfield. Finn has also just been dumped by his girlfriend, a fact that he’s having trouble processing.

However, Finn’s aware that if he wants to succeed in life, romantically or otherwise, he’ll have to fashion some sharper edges from his bland can’t we all just get along persona. This is difficult to do when your unironic masculine ideal is Mr. Rogers. Still, Finn is a devoted worker.

So if Finn must practice on bringing out his masculine confrontational assertive side by listening to self-help tapes that urge him to scream “I HAVE [TESTICLES]!!!!” then that is what he will do.

Arriving in Beaverfield, Finn is promptly ignored by most of the residents. One resident who does take a liking to Finn is the droll mailwoman Cecily (Milana Vayntrub-Lily from the AT&T commercials). Cecily identifies as a feminist. She fires a few sardonic shots at men in general but seems to like what she sees in Finn.

It could be that Finn’s the only semi-normal unattached age-appropriate man in town and Cecily is desperate. Cecily introduces Finn to the collectively strange townspeople. They include:

When Trisha’s little dog is killed by something unknown and the roads are rendered unpassable by a snowstorm, many of these people wind up at Jeanine’s lodge. 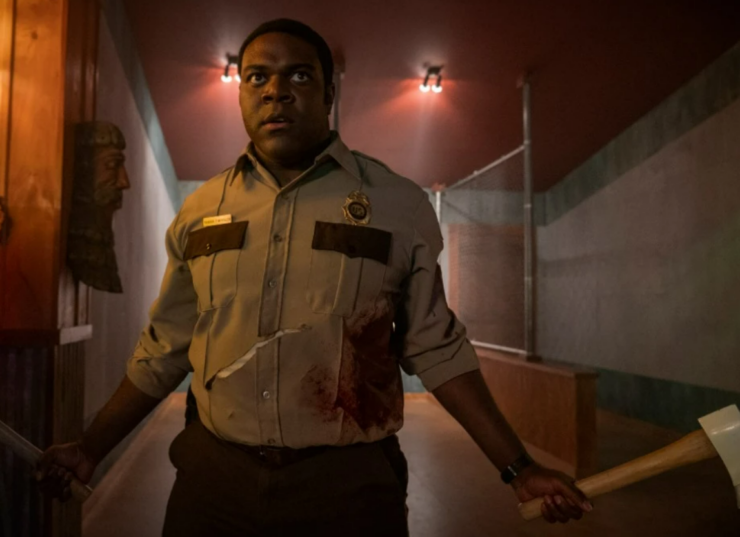 The town’s power goes out. Finn discovers that the generators were destroyed and that Jeanine’s husband did not actually run off to Belize. Dr. Ellis is researching what could have killed Trisha’s dog.

As the night drags on and strange incidents multiply people begin wondering if werewolves are real and if so, is a man or woman in their group the monster? And werewolf or not will Finn find the stones to stand up and be the leader that he thinks he can be?
This was a funny movie that ran just a little over an hour and a half.

I think the movie smartly plays its cards close to its vest until the very end about the existence of werewolves and who might the alleged werewolf or alleged killer be. The film’s humor highlights the fact that regardless of whether there is or is not a werewolf, most of these individuals are not the kind of people you’d want to be within a locked room.

The ensemble timing and how the characters all riff off of each other make this film so much fun to watch. Vayntrub and Richardson had good chemistry together. This was a perfect Saturday afternoon diamond in the rough sort of film.