As I mentioned in the review of Zindel’s book The Pigman, Paul Zindel was an author who primarily wrote for young adults, but really didn’t write down to them. Although his characters didn’t always have mortgages, resentful ex-spouses, demanding bosses, ungrateful kids or more typical adult concerns, the books generally have characters, who despite not being adults do have concerns that adults often have- whether or not they’re having sex if they’re normal or not, the relationships they have with their family and friends, and how much they hate their obligations, which instead of being paid work is usually school and doing what their parents tell them.

So you probably shouldn’t be put off by the young ages of the main characters. It doesn’t really matter. On the surface, this has some similarities to The Pigman. There are two teenage misfits, a house party that goes drastically wrong and some quirky kids and bullies but that’s pretty minor.

It’s a much darker tale and one that surprised me in some ways. There’s very real anger and even some ugly domestic abuse that came out of the left field. If this book was being written today that last would almost certainly be handled differently. I hope so at least.

This book tells the tale of two high school weirdos and their encounters with each other, their dysfunctional families and their struggles to move forward in life. It’s dramatically not a love story although there are some hints of that. Both the hero and heroine are in a special needs class. 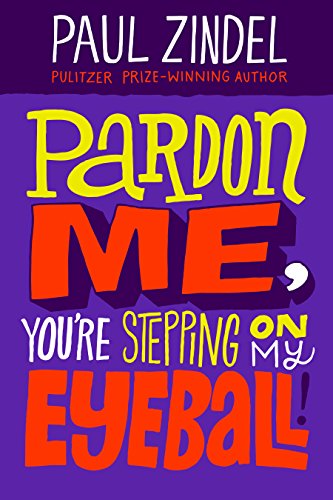 Louis Mellow, or as he prefers to be called, Marsh, is an intelligent high school student who spends his days writing down lists of all the things he hates and why he hates them. He idealizes his absent father, whom he calls Paranoid Pete and hates his whiny mean drunk mother, whom he refers to as Schizoid Suzy. Marsh always carries a baby raccoon that he rescued in his jacket pocket.  Marsh can be quite disruptive in class.

He enjoys telling people outrageous stories about his adventures with his father and their supposed lecherous dalliances with women and girls all over the continental United States and beyond. According to Marsh Paranoid Pete is locked in an insane asylum and about to be executed! Marsh doesn’t tell this part to most people and can be cruelly dismissive or insulting to anyone who doesn’t believe his stories.

Edna Shinglebox is a girl at Marsh’s school that Marsh decides he likes, just because anyone who has the nerve to walk around with a name like Shinglebox must have some heart. Edna actually suffers from social anxiety and gawkiness. Her hair gets caught in escalators and she makes involuntary head jerks when she gets nervous, which is often. Her parents think she’s going to die an old maid.

Her mother is extremely sarcastic and cutting. Her mother is trying to fix Edna up with anything of the male persuasion, weird or not. Marsh wants Edna’s help to rescue his father. Edna’s not sure if she likes Marsh but after he insults her a few times she finds the backbone to stand up to him and change how she approaches life in general.

She also rather quickly figures out the truth behind Marsh’s stories and must decide if she wants to help. I can’t say for sure of course but from the outside looking in I would think that Zindel wrote an extremely realistic young girl character. The common humanity that we all share shines through.

Everyone has problems here, whether it’s the overweight diabetic teacher who also knows why Marsh has issues and refuses to tell Edna or the rich girl who knows that the football player only likes her because she lives in a large house suitable for parties, or the malodorous psychic who wants to give Edna advice.

The ending is at best bittersweet but also leaves room for growth, which is all you can ask for in life. Worthwhile reading. Edna’s anger is awesome to see. This is also a very funny book. The title comes from the advice Marsh got from his father to not let anyone step on his eyeball.

Is justice delayed or justice denied? Honestly, what do you feel when you read about an 85-90-year-old man being arrested and charged with war crimes for what he supposedly did in World War Two? Do you think the soldiers in the Mahmudiyah or My Lai rapes and massacres got off easy? Does someone today have the right to hold someone accountable for what they did 50 years ago? What do you think when you read about someone suing an insurance firm or art gallery for actions they allegedly took during the Holocaust?

Often people’s feelings about this depend on whether they are the party seeking justice or the party with something concrete to lose, whether it be money, liberty or life. That’s just human nature.

One thing that is unfortunately true is that there were and are a great many people walking around, primarily but not exclusively in the South, who enforced segregation not reluctantly but with relish. And some of these people used violence to do so whether under the color of the law or on their own, albeit with the silent assent of a great many racist whites.

Many of these people were never brought to justice and likely never will be. The FBI is closing the books on several of these cases. And let’s be honest, for years the FBI did not consider these cases to be major priorities anyway.

But imagine if there were someone who felt that there was a debt that must be paid, no matter how much time had passed or whether the criminal had started a family and moderated his views. This is the premise of Blood on the Leaves, a book of fiction that is much a mystery and action set-piece as it is an essay of what true justice means.

In Mississippi, a number of elderly unrepentant white racists who were suspected or acquitted of killing Black protesters or citizens during the civil rights movement are all winding up dead often in the same way that their victims did.

A black professor, Martin Matheson, just happens to be giving lectures on various people that escaped conviction for their crimes during the sixties and seventies. He gets national attention. Matheson includes graphic photos of their victims along with pictures, names and current addresses and phone numbers of the perpetrators.

The powers that be try to shut this project down but nothing stops Matheson for long. Nothing that is until there is some physical evidence linking Matheson to one of the murders.

Matheson will be prosecuted by Mississippi’s only black deputy district attorney, James Reynolds, who both understands and resents his role here. Matheson will be defended by Todd Miller, an old-school white liberal with his own demons to exorcise.

This is a surprisingly good courtroom drama with the requisite number of twists and turns. This was Stetson’s first novel. At one point this was going to be made into a movie starring Jaime Foxx. I don’t know if that’s still a possibility.