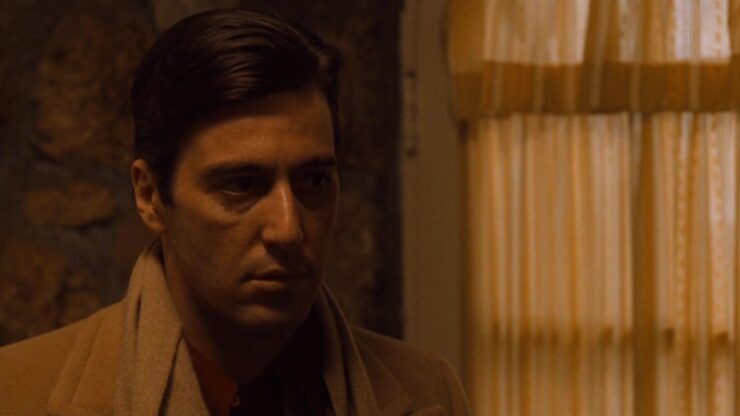 In the movie Godfather 2 after a long day of business, Michael Corleone finally returns home to his wife and children. Michael’s wife Kay has already gone to bed but was either not completely asleep yet or had awoken upon Michael’s return. The lamp by the bed was still on. As Michael looks at a picture that his son drew for him his wife Kay looks at him with love but then curiously asks why are the drapes in the bedroom window open.

Michael looks at his wife and then looks at the drapes. And he apparently sees the assassins just before they start shooting. He hits the floor and crawls over to throw himself on top of Kay until the shooting stops. Now the reason the drapes were open was to give the would-be assassins a better shot at Michael. That’s pretty obvious. What’s not so obvious is who opened the drapes. Kay asks Michael why were the drapes open. This makes sense because, like most women, fictional or real, then and now, Kay was not an exhibitionist.

She would undress in front of her husband but not in front of an open window. There’s no chance that Kay would have undressed/changed clothes for bed unless she closed the drapes prior to doing so. So that means that when Kay went to bed the drapes were closed. Someone entered Michael’s bedroom and opened the drapes. Who did this?

We know that Fredo Corleone was a traitor to his brother. We don’t know exactly what Fredo did. After the assassination attempt, the two would-be killers are found dead outside of Fredo’s house.

We see Fredo take a call from Hyman Roth associate Johnny Ola. Ola says “We need some more help.” Fredo stage whispers to Johnny Ola that “You guys lied to me!”and hangs up the phone. Much later, after Fredo has inadvertently revealed to Michael that he knew and was involved with Johnny Ola, Fredo still insists that “I didn’t know it was going to be a hit Mike!“.

As Fredo caustically informs Michael in an embittered speech he’s sick and tired of being considered the harmless butt monkey of the Corleone clan.
Whether it was his inability to control his drunk bigoted lecherous wife, his failure to protect his father from the Sollozzo assassination attempt, or his allowing Moe Greene to strike him without retaliation it’s clear that Fredo has always been weak and incompetent. People both inside and outside of the Corleone Family have that impression of Fredo. It makes sense that Roth would seek to use him.

But would Roth trust someone like Fredo with all his plans? Would Roth put all his eggs in one basket? Could Fredo quickly and quietly kill two assassins? Would even someone as dumb as Fredo not realize that opening drapes in his brother’s bedroom while Kay was asleep and Michael was away was a precursor to a hit? I think not. 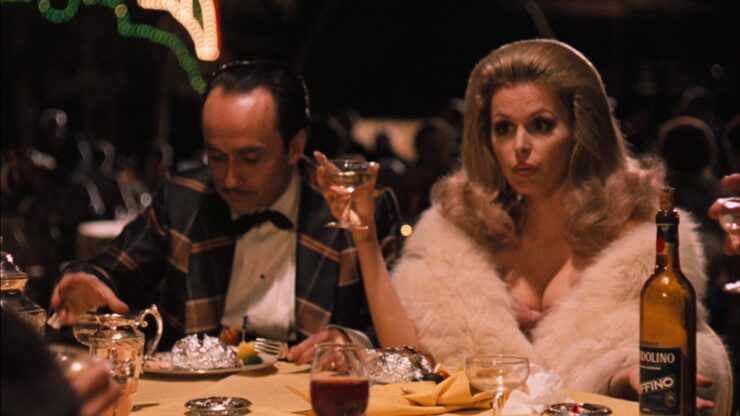 If Fredo did open the drapes he had to know it was a hit. And even if we think he was lying to Michael when he claimed ignorance of plans for Michael’s murder, when he spoke angrily on the phone to Johnny Ola it’s obvious that Fredo truly didn’t know of Roth/Ola’s plans. So whatever Fredo did he (a) didn’t know that Michael’s murder was imminent and (b) didn’t open the drapes.

The problem then is if Fredo didn’t open the drapes then who did? It’s unclear as to who would have had access to Michael’s home. Certainly his brothers Fredo and Tom would have had such access. We can rule out Tom though because even though Michael treats him coldly, Tom’s defining trait has always been loyalty.

Additionally, though vastly more competent than Fredo, Tom is not in the muscle end of the Family. He wouldn’t have been able to kill two assassins by himself.

Someone who is in the muscle end of the Family is Al Neri, Michael’s personal bodyguard and top assassin. In the aftermath of the attempt on his life Michael trusts no one but Tom. But just as Luca Brasi had virtually unquestionable loyalty to Michael’s father, Al Neri has similar fidelity to Michael. And Neri and Tom are both too close to Michael for Johnny Ola/Hyman Roth to risk the approach.

Kay Corleone is not in the business. She wouldn’t know Hyman Roth from Jack Benny. And although Kay would later come to loathe Michael it’s a safe bet that if she were going to try to set up her husband she wouldn’t leave herself in the line of fire. And she is closer to Michael than anyone on the planet. That only leaves one person.

He’s head of security at the Tahoe compound. It’s his failure of responsibility that has allowed two killers access to Michael’s property. He would have had access to Michael’s house. That both killers apparently had their throats slit suggests that they allowed one or more men to get close to them. They would only do that if they were meeting with someone they trusted. Someone like say Rocco, who allowed them on the grounds in the first place.

Rocco doesn’t have the close personal relationship with Michael that Al, Fredo or Tom have but he does have a large power structure of his own. If Michael were out of the way then Rocco could certainly make a play to take over the Family.

Or maybe Rocco was innocent. Maybe it was someone in his crew who murdered the men who had tried to kill Michael. Either way, given that Michael later assigns Rocco the blatantly obvious suicide mission of murdering Hyman Roth in public, it’s a fair bet that Michael never again trusted Rocco and wasn’t overly concerned with his impending demise. Was this assignment Michael’s way of killing two birds with one stone? Michael finishes off Roth and gets rid of a capo who was either horribly unlucky or already corrupted by Roth.

Still, even though Rocco is the only major character left who had the means and possible motive to let two assassins on the property and kill them before they could reveal anything, something still doesn’t feel right.

Although the open drapes are a nice touch that draws the viewer into Michael’s paranoid world of betrayals and sudden danger it’s still implausible that Rocco, a large man with a noticeable limp, could have walked into Michael’s home or especially Michael’s bedroom without notice. Unlike a relative he would have had no realistic reason for being there. If something went wrong, as indeed it did, Kay or her children would have mentioned Rocco’s earlier presence to Michael.

So even though Rocco is the most likely culprit I just can’t see him taking that risk. Could it have been a cleaning crew? They certainly would not think anything odd in opening drapes. But they certainly would find it odd cleaning at night while much of the family is in the home.  No, that really makes no sense at all. Not even a little bit. Forget I even mentioned it.

Why would Roth or Fredo or whoever the other traitor was bring more people in on this murder attempt. More people means more loose ends. Hmm. I don’t think we’ll ever know who opened the drapes in Michael and Kay’s bedroom. It was a beautiful cinematic flourish but one that falls apart when you think about it.

What do you think?