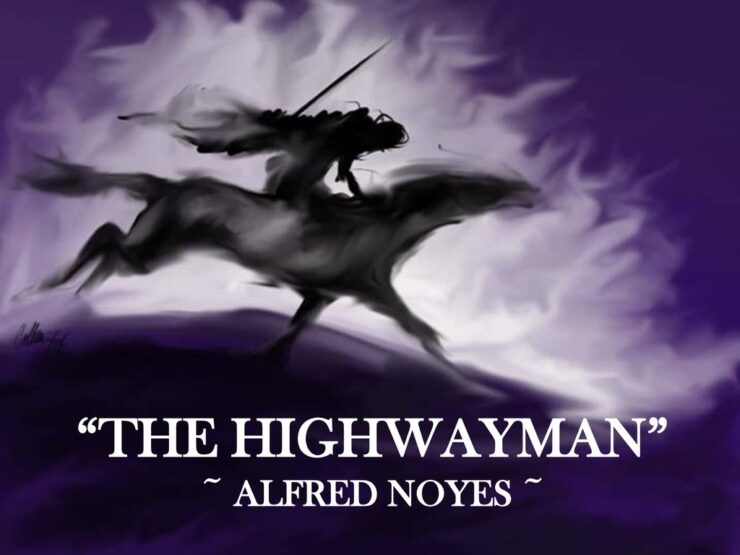 “The Highwayman” is a romantic poem created by the English writer, poet and playwright Alfred Noyes. I first encountered it as a young child in the Childcraft set gifted to me lo these many years ago by one of my great aunts. “Great” in that she was my father’s aunt, not “great” in that she was a wonderful person, though indeed she was.

Considering the subject matter, it’s unlikely that people would now consider the poem suitable for today’s hypersensitive generation but kids were made of sterner stuff back in the day. And I think my aunt might have already known that I liked to read. Anyway the poem did leave an impact on me I think. I have saved and kept that Childcraft book that had the poem. I ran across it the other day while looking for something else. It’s interesting what things from our childhood we keep.

The poem has a serious blues narrative. I suppose you could argue that things don’t end well for the poem’s doomed lovers. But you could just as easily say that the poem shows that true love will conquer all though death and hell stand in the way. The poem details the love between the titular character and Bess, the innkeeper’s daughter. However, jealousy and murderous soldiers end their love in this life, though perhaps not in the next.

There’s a balance between grim reality and romantic escape in this poem, which is echoed in many other works ranging from Tolkien’s Beren and Luthien saga to the Gallows Pole traditional song made famous by Leadbelly and Led Zeppelin and even the infamous ending to Arthur Penn’s Bonnie and Clyde. This poem lets everyone know that true love will conquer all. There’s not a drop of cynicism to be found within.

The poem is too long to reproduce in its entirety not that I want to do that here anyway but you can read selected portions below. Notice the poem’s rhythm, especially in the last two lines of each stanza. That’s probably why many people have adapted the words to music and created songs based off of this work. The poem is written in hexameter (six beats per line) but goes back and forth between iambic and anapestic. Read it aloud to yourself. It really does sound like a story told around campfires late at night.

“One kiss, my bonny sweetheart, I’m after a prize tonight,

But I shall be back with the yellow gold before the morning light;

Yet, if they press me sharply, and harry me through the day,

I’ll come to thee by moonlight, though hell should bar the way.”

And out of the tawny sunset, before the rise of the moon,

When the road was a gypsy’s ribbon, looping the purple moor,

King George’s men came marching, up to the old inn-door.

They said no word to the landlord. They drank his ale instead.

But they gagged his daughter, and bound her, to the foot of her narrow bed.

Two of them knelt at her casement, with muskets at their side!

There was death at every window; And hell at one dark window;

For Bess could see, through her casement, the road that he would ride.

They had tied her up to attention, with many a sniggering jest.

They had bound a musket beside her, with the muzzle beneath her breast!

“Now, keep good watch!” and they kissed her. She heard the doomed man say—

I’ll come to thee by moonlight, though hell should bar the way!

Nearer he came and nearer. Her face was like a light.

Her eyes grew wide for a moment; she drew one last deep breath,

Shattered her breast in the moonlight and warned him—with her death.

Back, he spurred like a madman, shrieking a curse to the sky,

With the white road smoking behind him and his rapier brandished high.

Blood red were his spurs in the golden noon; wine-red was his velvet coat;

And he lay in his blood on the highway, with a bunch of lace at his throat. 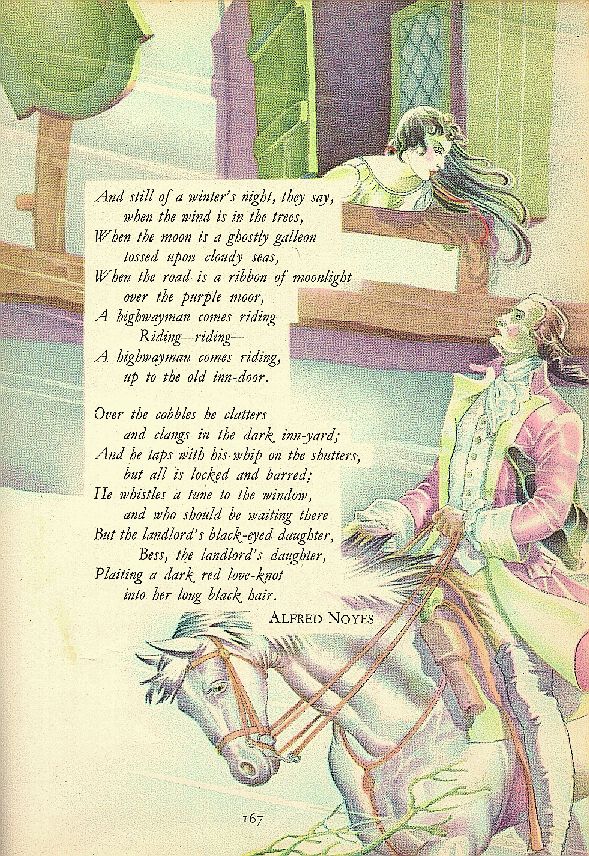 And still of a winter’s night, they say, when the wind is in the trees,

When the moon is a ghostly galleon tossed upon cloudy seas,

When the road is a ribbon of moonlight over the purple moor,

A highwayman comes riding, up to the old inn-door.

Over the cobbles he clatters and clangs in the dark inn-yard.

He taps with his whip on the shutters, but all is locked and barred.

He whistles a tune to the window, and who should be waiting there

Plaiting a dark red love-knot into her long black hair.