The obvious takeaways from this story are that (a) crack cocaine is a hell of a drug (b) drug abuse prematurely ages people something fierce and (c) despite what they sometimes claim cops are actually able to refrain from use of deadly force in stressful and dangerous situations when they want to do so.

And who is stupid enough to light up the crack pipe in front of agitated police officers attempting to make an arrest? Crackheads are stupid enough. That’s who. And I can’t be the only person who finds it ironic that the other dopehead arrested is actually named Weed. This is less Thelma and Louise than Dumb and Dumber. 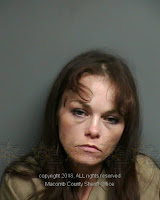 A 36-year-old female motorist from Eastpointe who a Macomb County Sheriff’s deputy tried to pull over smoked crack cocaine and then led authorities on a car chase, officials said Thursday. The incident happened at about 2 a.m. Oct. 25 in Harrison Township, according to the sheriff’s office.

The woman, identified as Kristi Rettig, has been arraigned on a charge of first-degree fleeing and eluding police, a felony, according to court records. A judge ordered Rettig held on a $20,000 bond. If convicted, she faces up to 15 years in prison. The sheriff’s office said she has also been charged with assault with a dangerous weapon, drug possession and driving with a suspended license. Rettig is a parole absconder who had not reported in since March, officials said. She has two prior convictions for drug possession, according to the Michigan Department of Corrections. She also has a 2005 conviction for unlawfully driving away an automobile. 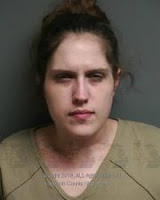 As deputies tried to box in her vehicle to stop it, Rettig crashed into two sheriff’s vehicles. She drove off the roadway and came to a stop, police said. Deputies then instructed the driver and her passenger to show them their hands, officials said. The passenger, identified as Alexandra Weed, 28, of Melvindale, complied, according to police. Weed has been charged with drug possession.