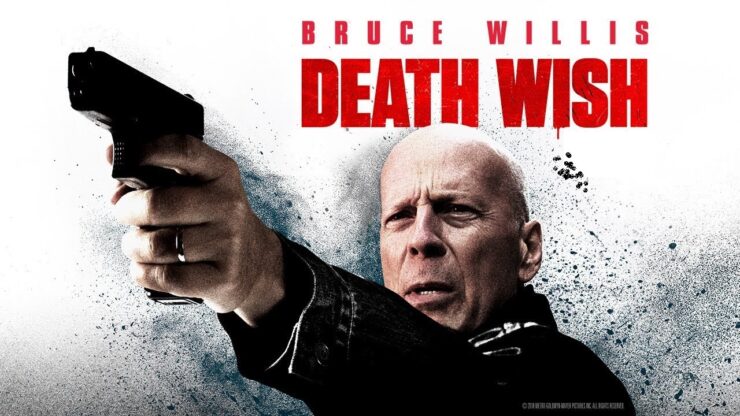 This is a remake of the iconic 1974 Charles Bronson movie. Some people who share some of my political affinities often sneer at vigilante films, thinking them by definition fascist, racist, authoritarian, gun-crazed, misogynist, sexist, and any sort of other “bad thought” insult they can hurl. I don’t see things that way. I think that everyone has the natural right to defend themselves by any means necessary. The attack on Rosa Parks showed us there are people out there who will hurt anyone. I think that we all must build a world in which fewer people think that crime pays. I also know that we only have one life. We don’t owe anyone that life. We need not apologize in defending ourselves from criminals no matter their race, ethnicity or nationality.

So I have no particular brief against vigilante films. I think that most people can differentiate between entertainment and reality. Unfortunately, this film didn’t touch the same nerve endings the original movie did. Crime in 2018 is not as high as it was in 1974. The original film was more explicit depicting the horrors visited upon the Kersey women. That’s, perhaps thankfully, missing here. So there’s not really the same visceral fist pumping reaction when the Kersey patriarch starts shooting down bad guys.

This film featured dark humor, which wasn’t surprising considering the director. The movie’s occasionally irreverent tone took me out of Kersey’s worldview, which I thought was a big mistake. The whole idea behind self-defense or vigilante films is that the viewer should identify with the protagonist and ask himself what would he do in a similar situation.
When you leaven that with too much humor it can leave a bad taste. Here the director is just using the story to show some grossout scenes which he finds amusing. Death Wish spends too much time celebrating the various cool and funny ways in which the protagonist eliminates miscreants. This remake changed the setting from New York to Chicago. Chicago, because of its high homicide rate, has a certain reputation as a place where law has broken down and life is cheap. Every day, some conservative somewhere uses Chicago as a example of liberal or Democratic ineptitude and dishonesty. To some, current day Chicago is what the seventies era South Bronx was.

Instead of an architect, the remake’s Paul Kersey (Bruce Willis) is a trauma surgeon who works to save the lives of people impacted by the violence. Compared to the original, 2018’s Death Wish sets up a greater contrast between the initial peaceable Kersey, who daily struggles to save lives, and the man he later becomes. It also argues that Kersey’s later actions are compassionate and grow out of his work. YMMV on this.

Although both Death Wish films invoke a region associated with THOSE PEOPLE as a particularly dark and brutish place, the men who attack Kersey’s wife Lucy (Elisabeth Shue) and daughter Jordan (Camila Morrone) are not black. And they weren’t in the first film either. Kersey is what you might call an equal opportunity vigilante. He’s not interested in shooting non-whites. He’s interested in shooting the kinds of people who murdered his wife and beat his daughter into a coma.

Death Wish stumbles in exploring the sadness caused by the death of a loved one, particularly if we think that it wasn’t their time. Kersey’s a broken man who can’t respond to his street smart brother’s (Vincent D’Onofrio) clumsy attempts to express sympathy or his Texas father-in-law’s statement that a man protects his own. Kersey gamely tries to light a fire under the phlegmatic detectives (Dean Norris, Kimberly Elise) assigned to his wife’s case but soon decides that the detectives are a lost cause. The movie should have delved deeper into the grieving process and the emptiness death leaves in our lives. But it’s not that kind of party. D’Onofrio in particular was wasted.

Kersey starts hanging around gun stores and watching instructional videos on YouTube. Soon, Kersey deftly pockets an illegal gun from a shooting victim and goes looking for violent criminals. Such people are not in short supply in Chicago. Kersey hopes against hope that eventually he’ll find the specific hoodlums who murdered his wife.

There are a few scenes where the famous Bruce Willis smirk makes its appearance and some other crowd pleasing vignettes but ultimately this remake offered nothing new or different. Death Wish is strangely soulless. It lacks the original’s bite. If you like this genre you won’t miss much by waiting for streaming, DVD or VOD. Obviously if violence disturbs you and the endorsement of violence offends you then stay away from Death Wish. Look elsewhere my friend.

This is a modern noir that is written by one brother and directed by another. It is reminiscent but not necessarily derivative of the Coen Brothers’ early work. Midnighters is made better because the actors are not that well known. All of them provide taut displays of angst, love, frustration and lust. Like a lot of good noir films, just one small mistake can send people down paths they never knew existed. Husband and wife Jeff (Dylan McTee) and Lindsay (Alex Essoe) have what looks like a good life. They own a large classic home which they are remodeling, possibly to flip for profit. But looks can be deceiving. Jeff is a former college athlete, a pitcher whose ninth inning meltdown lost the College World Series and evidently cost him his shot at the major leagues. Jeff won’t live that down. Jeff has subsequently refused to find and keep regular work, though he claims to be looking. Lindsay, an aspiring banker, brings in the couple’s only regular income.

Although modern people often claim to be beyond such silly things as sex stereotypes, the reality is that many men and women still expect the man to be the primary, if no longer sole provider. A man who fails in that role or refuses even to try will almost inevitably have issues with his honey. And Lindsay is no different. She’s becoming more and more annoyed with Jeff. She doesn’t want a house husband. Lindsay is peeved that at her company’s New Year’s Eve bash, Jeff sulked on the periphery and refused to interact with Lindsay’s co-workers or bosses.

As they return home each spouse is a little buzzed and irritated. Jeff decides that the best way to restore marital bliss is to let his fingers do the walking on his wife’s thighs. Lindsay appreciates his tactile dexterity. However, before Jeff can move his hand up high and reach paradise by the dashboard light, having understandably taken his eyes off the road, he hits a man.

When you hit someone with your car there is a procedure to follow. Lindsay and Jeff don’t follow that procedure. Fearing that neither of them will pass a blood alcohol test and not wanting to jeopardize Jeff’s freedom or Lindsay’s job, the couple declines to call the police or take the man to the hospital. It looks like the fellow is dead anyway. The couple reasons it’s best to wait until the alcohol dissipates before calling the cops. They place the man in the back seat and continue on their way. The couple reaches home and makes two very unpleasant discoveries: (1) post-accident their license plate is missing and (2) the now deceased man had their address on a note in his pocket.

The Ramsay Brothers ramp up the tension. This film takes its time and pays attention to all the little details of male:female interactions, guilt pangs, and a cat and mouse game where you’re not sure who is the cat. This film will have viewers glued to the seat waiting to see what happens next. The many plot twists rarely felt forced to me. Even though the characters are only briefly drawn they seem real. The viewer will care about what happens to them. The dialogue is smart and snappy. Lindsay’s sister Hannah (Perla Haney-Jardine), who sometimes lives with the couple, shows up and almost immediately makes things worse. A smarmy detective (Ward Horton) arrives to ask questions, but already seems to know many answers. You should see this movie. Unlike say Death Wish, this film is thoughtful. Perfect? Of course not. But I liked how the couple’s bad decisions and bad luck limited future choices.