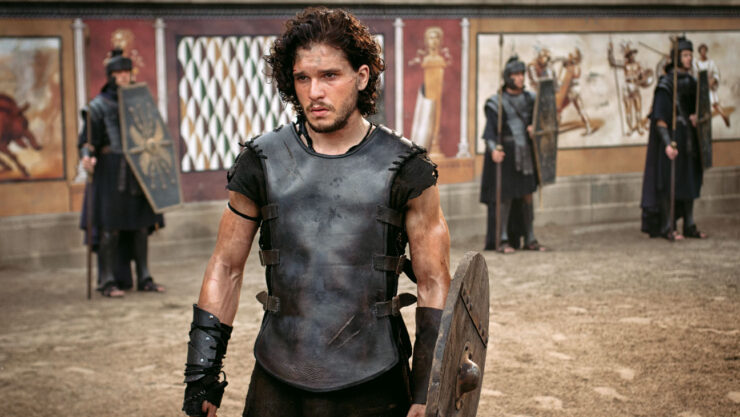 This 2014 film was a throwback to classic disaster movies in many ways, some good, others bad.

Unfortunately, it took a wrong turn almost immediately by trying to graft on a romantic storyline (a la Titanic) to a set of events that didn’t really need that standard Hollywood trope added.

The film also irritated me a little because it saw fit to bring back another trope that should be discredited by now, of having Black characters sacrifice themselves to save UNRELATED white characters.

I understand and appreciate how a character might decide to give up his/her own life to ensure that a spouse, child, or relative survives. I also understand that in tragedies sometimes people sacrifice for each other in the moment.

But doing it just because you’re impressed by the backstory of someone you just met and may not even like?  And to always have the sacrifice go one way and not the other? To me that’s just bad writing and reeks of racial solipsism. I think that good writing should reflect reality, in which everyone is the hero or heroine of his or her own life and and is not going to be in a rush to throw away or lose their life just because. But then again this is a disaster movie. The story’s true impact is in the special effects, which don’t disappoint, even though in certain scenes they are too obvious in the CGI look.

Pompeii might for a brief moment, make you pause and think about how vulnerable we all are to natural disasters, whether they be hurricanes, tornadoes, locust infestations, solar flares, earthquakes, floods, or for that matter, volcanoes.

Milo (a bulked up Kit Harrington (Jon Snow) from HBO’s Game of Thrones) is a Celtic gladiator who has spent the past seventeen years being enslaved by Romans. Milo’s parents were brutally killed by the Roman general, now Senator Corvus (Kiefer Sutherland, who evidently really enjoyed chewing up his scenes). Milo is bought by the amoral slave trader (is there any other kind) Graecus (Joe Pingue), who intends to have Milo work as a gladiator in Pompeii.  Along the way,  Milo has the opportunity to impress the naive but attractive Roman lady  Cassia (Emily Browning) who either really likes Milo’s innate kindness or his eight pack abs. They’ll see each other again.

In the gladiator pits Milo becomes “frenemies” with the champion African gladiator Atticus (Adewale Akinnuoye-Agbaje) who is scheduled to be freed with just one more victory. Atticus’ final opponent will be Milo. The two distrustful men slowly bond over their shared tales of enslaved woe , while keeping an eye on each other’s martial strengths and weaknesses.

And wouldn’t you know it, Milo sees that the man on whom he wants revenge more than anything, Corvus, is in Pompeii. And Corvus has the hots for Cassia.  They have history. Corvus is not a man who understands no. And since he’s a Senator not many people tell him no without some negative consequences.

There are more tremors and small earthquakes each day. Some people know what this means and head out of town pronto. Others will find out the hard way. All in all a Saturday afternoon kind of movie but not something you will remember long for good or ill.